Andrey Rublev wins his fourth tournament this season in Gijon, Spain, to move back into the Top Eight in The True Tennis World Ranking. Felix Auger-Aliassime wins his second singles title of the season and career in Florence and is now very close to the Top Ten.

These were two very convincing performances by Andrey Rublev and Felix Auger-Aliassime. In the final in Gijon, Spain, Rublev left no doubt at all who will be the champion of the 250cc tournament (E category). In the semi-finals, he beat Dominic Thiem, who was playing much stronger again, 6-4, 6-4, and in the final, he beat Sebastian Korda from the USA even more clearly 6-2, 6-3. This was already the fourth tournament victory for the Russian, who thus rises from 11 to 8 in the JFB ranking. At the same time, the 24-year-old has excellent chances to qualify for the ATP Finals again.

In Florence, Italy, Felix Auger-Aliassime put in a similarly commanding performance. He beat Lorenzo Musetti 6-2, 6-3 in the semi-finals of the E tournament and J. J. Wolf 6-4, 6-4 in the final. The Canadian now seems to have hopefully broken his finals curse. He lost nine of his first ten finals at ATP tournaments. But this year things are looking much better for the 22-year-old. After winning the ATP Cup together with his compatriot Denis Shapovalov in January, he won his first singles tournament in Rotterdam (D) and now his second in Florence.

In the ATP Race he is now right behind Rublev on position 7 and has a good chance to qualify for the ATP Finals as well. However, Taylor Fritz and Hubert Hurkacz are close behind him in the race and Djokovic, who is only ranked 10th by the ATP, is already qualified thanks to his Wimbledon victory. In order to collect more points, Auger-Aliassime has also entered Antwerp (E) this week. As the still reigning Antwerp champion Jannik Sinner cannot compete for his title defence due to injury and thus loses ten points in the JFB Ranking, Auger-Aliassime will definitely overtake Sinner next Monday as well.

Cameron Norrie, on the other hand, who won the C tournament at Indian Wells (Masters 1000) a year ago, which was postponed from March to October, drops significantly in the JFB Ranking this week as the 40 points for that tournament win were cancelled after 52 weeks. Nikolos Basilashvili, who was a finalist at Indian Wells last year, loses 24 points and even drops out of the top 50.

By reaching the semi-finals in Florence (3.5 points) Lorenzo Musetti moves into the Top 30, Gijon finalist Sebastian Korda into the Top 40.

And this is how the JFB 52 Week Tennis World Ranking (The True Tennis World Ranking), which is not selective but evaluates all official tournaments, including those not organised by the ATP (all Grand Slam tournaments, which are basically weighted 25 per cent higher than by the ATP, Olympic Games for 52 weeks after they are held, Davis Cup, Laver Cup and also the Next Gen Finals), looks after Gijon and Florence: 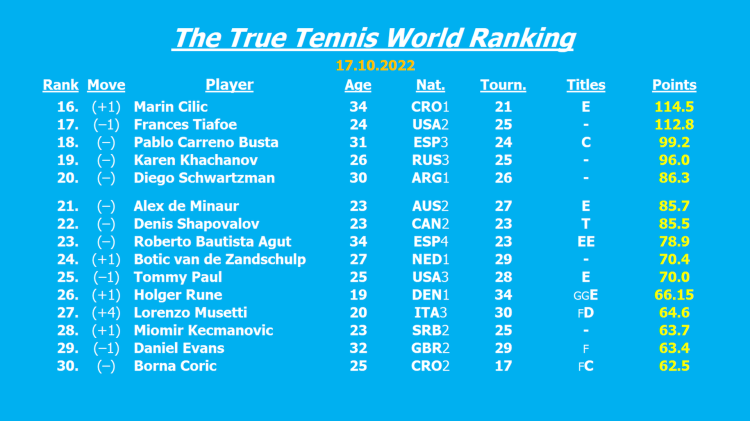 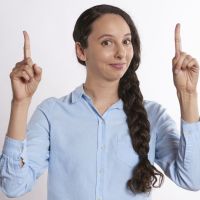 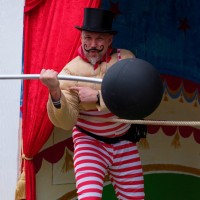