The men’s tennis year is almost over. On Sunday, Novak Djokovic won the ATP Finals for the sixth time. The Davis Cup Finals follow this week and otherwise only Challenger tournaments. It is already clear who the three best players of the year were.

Nadal, Djokovic and Alcaraz are the top three players of the year

Felix Auger-Aliassime also won the 250 tournament in Antwerp (E category) on 23 October directly after Florence, Rune won in Stockholm and Musetti in Naples. The following week Medvedev won the D tournament (500s) in Vienna and Auger-Aliassime the one in Basel. The Canadian thus won three ATP titles within three weeks. The following week he was eliminated in the semi-finals of the Masters 1000 in Paris-Bercy (C category) against Rune, who then also beat Djokovic in an absolutely high-class final. The 19-year-old Dane thus broke into the top 15 of The True Tennis World Ranking for the first time.

Last week, the last highlight of the year took place in Turin in the singles and doubles competitions. At the ATP Finals (B), Novak Djokovic first won all three group matches, then beat Taylor Fritz in the semi-finals and Casper Ruud in the final. The Serb overtook Carlos Alcaraz by a hair’s breadth. Since the top five will not play in the Davis Cup Finals this week, it is already clear that Nadal, Djokovic and Alcaraz are the top three players of 2022.

Nadal played an outstanding first half of the season, the only player to win two Grand Slam tournaments (A) this year, first the Australian Open in January, then Roland Garros in June. He also remained unbeaten at Wimbledon, but was unable to play his semi-final against Kyrgios due to injury. He reached the last 16 at the US Open, but otherwise the months after Wimbledon were rather disappointing for the Spaniard, who became a father for the first time in October. With the eight points for his victory over Casper Ruud in the last group match at the ATP Finals, however, he just managed to move ahead of Alcaraz, who had to retire with an injury in the quarter-finals of Paris-Bercy against Rune and could not compete at the ATP Finals. The 19-year-old Spaniard won five ATP tournaments this year. The highlight was his victory at the US Open (A) in September. Having already won two Masters 1000s (C) and two 500s tournaments (D) by May, he actually managed to earn his first Grand Slam title.

Like Nadal, Novak Djokovic was only able to play twelve tournaments this year, but not because of injuries, but because he was not allowed to travel to two of four Grand Slam and four of eight Masters 1000 events due to a lack of COVID-19 vaccination. Djokovic won the C tournament in Rome and then played an outstanding second half of the year, especially from Wimbledon onwards. In July, he won the most traditional tournament in the world for the seventh time with a final victory over Kyrgios. This was followed at the beginning of October by two minor tournament victories in Tel Aviv (E) and Astana (D) and then the second highlight of the season for the Serb, his sixth title at the ATP Finals (B), with which he equalled Roger Federer’s all-time record.

Nadal, Djokovic and Alcaraz have thus divided the five most important titles between them. Nadal won the first two Grand Slam tournaments, Djokovic the third and the ATP Finals, Alcaraz won the US Open. Casper Ruud, the world No. 4, reached the final in three of these five most important tournaments. He lost to Nadal at Roland Garros, Alcaraz at the US Open and Djokovic at the ATP Finals.

Normally, you need about 400 to 550 points to become No. 1 in the world in the JFB Ranking. Nobody managed this in the last twelve months. Nadal, Djokovic and Alcaraz are the only ones who have over 300 points and they are extremely close. These three are virtually sharing the No. 1 spot this year.

And this is how the JFB 52 Week Tennis World Ranking (The True Tennis World Ranking), which is not selective but evaluates all official tournaments, including those not organised by the ATP (all Grand Slam tournaments, which are basically weighted 25 per cent higher than by the ATP, Olympic Games for 52 weeks after they are held, Davis Cup, Laver Cup and also the Next Gen Finals), looks after the ATP Finals and before the Davis Cup Finals (The players whose names are marked with a * still have the opportunity to score in the Davis Cup this week): 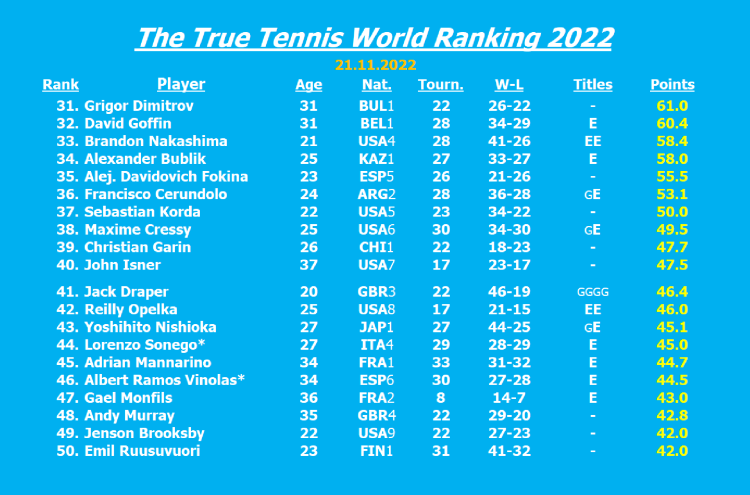 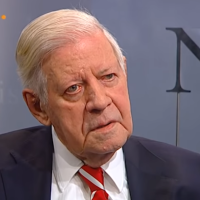